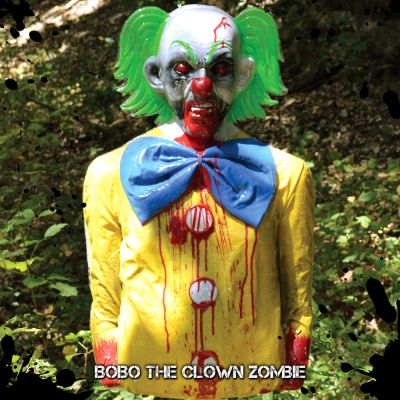 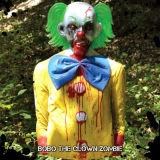 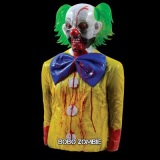 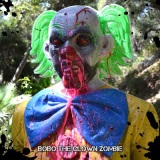 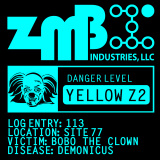 Bobo the miserly Clown was always on a budget, always looking to save a buck on his costumes, so this cheap-skate went searching in the old paint factory dumpsters… He found some old moldy tubes of what he thought was face paint deep in the dumpster, he couldn’t wait to get them home and try them out.  When he opened them up, they had a vile odor, but he figured for free he’d make due.  Upon painting his face and arms, he noticed an intense burning sensation as if his skin was on fire.  These paints were loaded with Zomaldehyde, an industrial strength form of formaldehyde used to stabilize toxic chemicals.  When mixed with the lead base of the paint, it made for a more than lethal chemical pigment, which went right into his blood stream and rendered him brain dead within seconds.  With such large amounts of Zomaldehyde in his system to preserved his flesh… Bobo was now a moaning Undead Clown searching for his next unhappy victim.

Each Patent Pending “Bobo the Clown” Zombie is cloned in San Diego, California and is hand painted to accurately resemble an infected clown that just finished gnawing young Timmy’s eye out, to give you that realistic look so you really hate this clown! What makes our Zombie’s so special?  They’re filled with biodegradable matter, which makes clean up a wee-bit easier…(are you happy, mom?) …and oh yah, let’s not  forget, they bleed and burst into little pieces of blood soaked, Zombie Clown matter when you shoot them!

Features: Use any and all means necessary to
shoot the face off this Clown.
When your Zombie arrives, proceed with extreme caution and carefully drag the box to a secluded area. Be careful of contents, as the Zombie is not dead, only dormant. Recommend individuals organize weapons, supplies and Zombie hunting task force before opening box, your life might possibly depend on it. If you fail to destroy enclosed Zombie, call for backup before returning to the scene. Use our Zombie Targets in the same cautionary manner as you would a paper target and remember,
always use common sense around live munitions. When you aim, point directly at the figure but be warned, pieces of simulated Clown flesh and body parts will detach upon impact.

All Zombie Industries’ products
represent fictitious characters and are works of fiction.  Names, characters, stories, places and incidents are products of the author’s imagination and are used fictitiously.  Any resemblance to actual persons (living or dead), events or locales is entirely coincidental.

At ZMB Industries we take training
and preparedness extremely seriously! We understand that there are many aspects of training that encompass various complimentary disciplines which go into emergency/disaster/conflict preparedness.  That’s why all our ZMB Industries’ training dummies also provide a training platform for Medical First Responders.  Marksmanship is a critical skill in today’s encounters for both Military & Law Enforcement personnel; and our training dummies provide numerous skill acquisition benefits for forward operators.  But we take
training a step further by providing a universal aid that also address the
aftermath.  That’s right, our 3D training dummies provide a realistic aid for teaching various emergency treatment procedures such as dealing with ballistic trauma, administering cardiopulmonary resuscitation (CPR), aspiration,
defibrillation, intubation and infusion.  We believe that providing the most realistic training dummies produces better trained professionals. That’s why at ZMB Industries we are committed to creating innovative training dummies that address emergency situations both during and after horrific events.